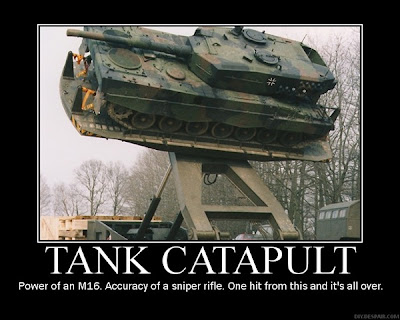 And who doesn't need one of these at home? 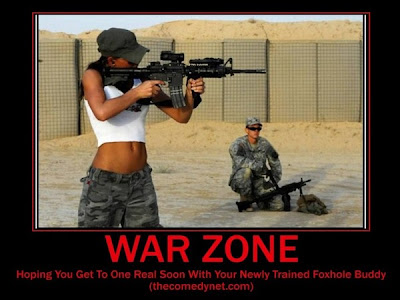 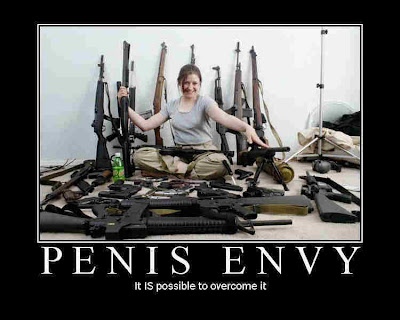 Of course these are not the actual thing and therefore the envy will still be there until fully sated.

Julian Assange on my Television 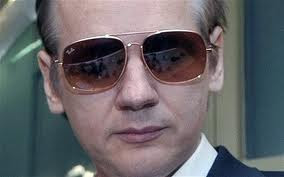 I was watching my television whilst lying in bed the other day when I was struck by how close together Julian Assange's eyes are.

I'm not saying that this the reason why he is a snivelling little rat but does at least suggest a genetic predisposition to rat like behavior?

Posted by Josh Smith at 5:37 AM No comments: 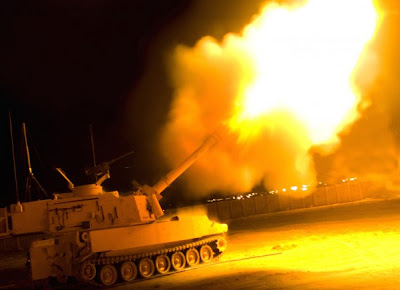 The M109 Paladin Integrated Management, or PIM, is slated to begin low-rate initial production by 2013, and features a 600-volt on-board power system designed to accommodate emerging networking technologies as they become available.

The PIM's on-board power system harnesses technologies developed for the Non-Line-of-Sight Cannon, or NLOS-C, a 155mm Howitzer formerly developed for the Future Combat Systems, Manned-Ground Vehicles program. That program was canceled in 2009.

Prototypes of the vehicle, built by BAE Systems, are now undergoing government testing in preparation for an low-rate initial production decision. The PIM vehicle's cannon rests on a chassis built with Bradley Fighting Vehicle common components including engine, transmission and tracks.

"Being common with Bradley decreases the logistics footprint that echelons above brigades will have to manage," Furber said. "In the long term, it will decrease the amount of money needed to sustain the Bradley and Self-Propelled Howitzer fleets. We will only have to manage one engine, for example, in the supply chain, so there are economies of scale that are beneficial to the Army."

The testing includes reliability, availability and maintainability mission testing as well as ballistic hull and turret testing. Both testing regimes are designed to prepare the program for a Milestone C production decision by 2013.

Like other 155mm artillery systems, the Paladin will be configured to fire precision munitions such as the Excalibur and the Precision Guidance Kit. The PIM is being designed to provide key fire-support for a range of potential combat operations to include conventional, hybrid, irregular and counterinsurgency scenarios.

"While PIM is associated with the heavy brigade combat team, it is a full-spectrum operational platform," Furber said. "For instance, it would allow the artillery crew supporting light infantry on a forward operating base to be protected from indirect fires -- something towed artillery pieces are not able to do."

The Army plans to build 580 new Paladin PIM sets. Each set includes a self-propelled howitzer and an ammunition resupply vehicle. The existing fleet of M109A6 Howitzers are nearing obsolescence. Those weapons were originally designed in the 1950's and produced in the 1960's.

As a result, the current fleet exceeds its weight and power capacity and does not provide for growth in mobility and force protection, thus emphasizing that the PIM program is necessary to address the existing capability gaps for self-propelled artillery.
Posted by swineflu at 9:51 AM No comments: 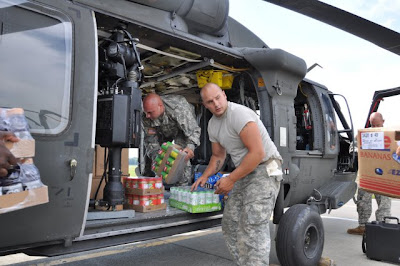 The first flight of New York Army Guard aviators occurred on Sunday, just after the brunt of the storm passed over the state. Aviators flying from the Army Aviation Support Facility at Albany International Airport flew south into Greene County to see if they could assist in rescuing people in the town of Prattsville who were stranded by rising flood waters. The stranded civilians were rescued before the helicopters were needed that night.

At first light on Monday, the citizen-Soldier aviators of Task Force Aviation began flying surveillance missions so that state officials could begin to assess the impact of the storm. On both Long Island, where Hurricane Irene first hit, and Catskill Mountain towns where small creeks became raging rivers, the Guard UH-60s provided eyes in the sky.

In a joint operation, three New York Air National Guard HH-60 Pavehawk search and rescue helicopters, which had been evacuated from their base on Long Island to escape the storm, were dispatched to Schoharie County to conduct search and rescue missions if necessary.

On Tuesday and Wednesday, the aviators began hauling food and water.

CH-47D Chinook heavy lift helicopters assigned to B Co. of the 1st Battalion, 126th Aviation picked up Federal Emergency Management Agency supplies flowing into Stewart Air National Guard Base. The supplies were loaded into the Chinooks and flown to Belleayre Ski Center, a state-owned facility in Highmont, Ulster County.

At Belleayre, UH-60s from the Albany flight facility picked up water and food and airlifted them into Margaretville, Prattsville, Middleburgh, and other Greene and Schoharie County mountain towns which were not easily accessible by road.

Other flights carried food and water donated by the Regional Food bank of Northeastern New York. Soldiers packed the UH-60s full of food and bottled drinks and sent them on their way.

WASHINGTON, Aug. 19, 2011 – In his clearest statement on the subject to date, Defense Secretary Leon E. Panetta said today that if the military retirement system changes, it will not affect serving service members.

“I will not break faith,” the secretary said during a roundtable meeting with military media representatives in the Pentagon.

Panetta’s predecessor, Robert M. Gates, asked the Defense Business Board to look at the military retirement system and make recommendations. The final report is due later this month, but Panetta said he is familiar with the outlines of the proposal.

“I certainly haven’t made any decisions” on retirement, he said.

People in the service today will come under the current retirement system, which gives retirees 50 percent of their base pay after 20 years of service.

“Does that stop you from making changes?” Panetta asked. “No, because obviously you can ‘grandfather’ people in terms of their benefits and then look at what changes you want to put in place for people who become members of the all-volunteer force in the future.”

One aspect of the retirement issue is one of fairness, the secretary said. Most service members do not spend 20 years in the military and therefore do not get any retirement benefits when they leave the service.

“They are not vested in any way,” Panetta said. “The question that is at least legitimate to ask is, ‘Is there a way for those future volunteers to shape this that might give them better protection to be able to have some retirement and take it with them?’”

Health care is another area that has to be dealt with, the secretary said. In fiscal 2001, the DOD health care bill was $19 billion. It is more than $50 billion now, he said, and it soars to the neighborhood of $60 billion in future years. Among proposals Congress is contemplating is an increase in some TRICARE military health plan premium payments.

“I think those recommendations make sense,” Panetta said. “Especially with tight budgets, it does make sense that people contribute a bit more with regards to getting that coverage.”

The Defense Department -- which is responsible for a large part of the nation’s discretionary budget -- will do its part to reduce the budget deficit, the secretary said. But while Defense has a role to play, he added, Congress has to deal with the more than two-thirds of the federal budget that represents the mandatory spending.

“If you are serious about getting the deficit down,” Panetta said, “you have to deal with the mandatory side of the budget and taxes.”

DOD has a responsibility to look at all aspects of the budget, the secretary said, and officials at the Pentagon are doing that.

“This is not because it is necessarily going to hurt areas,” he added, “because frankly, a lot of this can be done through efficiencies, a lot of it can be done looking at the administrative side of the programs: what can we do to make these programs more efficient?”

The secretary said he believes the budget crunch can represent an opportunity to make DOD a more efficient, effective and agile force that still can deal with the threats of the future.

The department also needs to ask how to provide benefits for troops and their families that will be effective at ensuring the nation always has a strong volunteer force, Panetta said.

“That’s a debate and discussion that it’s important for the Defense Department to have, the White House to have, the Congress to have and the country to have,” he said. “[We] need to have that debate about ‘How are we going to do this in a way that maintains the best military in the world?’”

The Defense Department will face some tough choices, Panetta acknowledged.

“I think the bottom line is this can be an opportunity to shape something very effective for the future that can still represent the best defense system in the world,” he said.